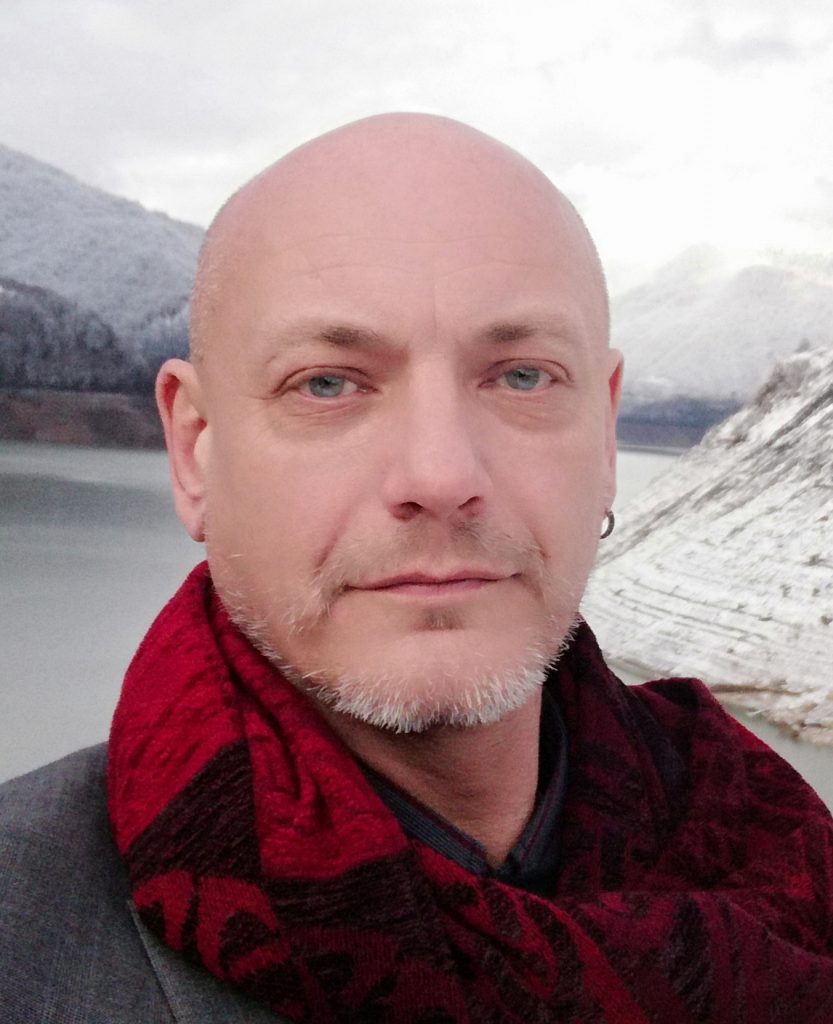 This article first appeared in IATEFL voices magazine in 2019

My life in ELT

IATEFL member Alan Mackenzie talks about his life and work

1: Tell us a little about your career path. How did you get to where you are now? What made you choose this direction?

As a graduate in Environmental Science in 1989, during the miner’s strike in the UK and way before the world went green, my options were counting trees or deer. Instead, I decided to take ‘a year out’ teaching English in Japan and come back to the UK and get a ‘real’ job later. Little did I know that was going to take 25 years!

A number of the companies I worked for in Japan don’t exist anymore, victims of changing fortunes and shifting markets. Simul Academy still does, though having been bought over and remoulded, it doesn’t quite have the same flavour it used to.

As a keen new teacher straight out of a rubbish language school, the rigour of the content and skill-based programme developed by Simul through CNN and BBC news videos and newspaper articles was highly stimulating. I went on to develop the two highest levels of Simul’s programme, equivalent to CEFR C1 and C2, for a number of years and was branch manager in Ochanomizu.

Becoming a manager was a strange experience. One day you are one of the teachers, the next you are an alien to them and are supposed to have the answers to every question they can throw at you. If you don’t have an answer, there must be a conspiracy in there somewhere, rather than a lack of knowledge on your part.

“Us workaholics tend to forget that it’s not all about work. Life is often more important”

Since I had never had a qualification and this was now six years into my teaching career (and I did think of it as a career at this point), I needed a piece of paper saying I could teach. Luckily, Simul hosted the Teachers College Colombia branch campus programme in Tokyo: my next big PD boost. I loved every course I took at TC and thrived there – so much so that I was invited back to teach on the programme, delivering the course on Developing Autonomy with Nanci Graves (RIP, whom I will always regard as my mentor and guru, even though she would have hated those labels). I have now designed, written (with Russell Stannard) and delivered the NILE online MA module in Developing Learner Autonomy for the last four years.

The MA qualified me to teach at universities and colleges, so I left Simul and moved into a completely different sector of education. In my first year, I was nominated for the award of best newcomer to college and university education by the College and University Educators Special Interest Group of the Japan Association for Language Teaching (or CUE SIG of JALT). At the meeting where I was presented the award, I was also nominated as coordinator of the SIG; that led to three mini-conferences with proceedings, doubling the membership and subsequently being put in charge of organising the JALT international Conference at a very difficult time for the organisation. However, it happened – and very successfully – and we made record surpluses, helping to get the organisation back on an even financial and organisational keel. Those experiences were where I gained my project management skills.

Coming up to 40, and having been in Japan 15 years, I decided there were other places to go and things to do. I wanted to leave Japan while I loved it, and I still do. So I took a position with the British Council in Thailand, working on teacher development projects. In 2008 that became an East Asia regional position, and I later moved to India and Pakistan, working on larger and larger scale projects.

So, 25 years later, when I needed to move back to the UK, the ‘real’ job turned up in the shape of a Directorship and NILE, in charge of project development and management. That move, home to the UK, of all the moves to weird and wonderful countries I have made, involved the most hard work! Administratively, financially, and culturally, moving to England – my latest foreign country – has certainly taken the most energy.

Last year I started my own consultancy company, TransformELT, with Sarah Mount and Alan Pulverness. In the last two years, we have worked in 16 different countries and the list is growing. 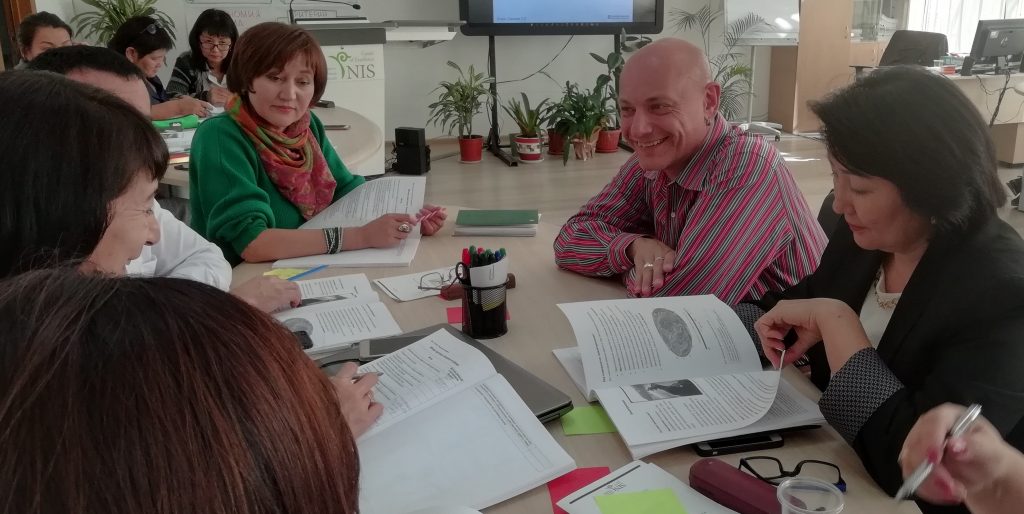 2: What does a typical day look like for you?

There is no such thing. One day I can be in Georgia, as I am now, on a scoping visit, meeting with MoE officials, head teachers, students and teachers, and observing classes. The next I could be writing all day: writing reports for Kuwait, doing material development projects for BC, firefighting a project with issues, recruiting consultants for France or writing proposals for West Africa.

3: What do you particularly enjoy about your work? What inspires you?

Watching people learn and change what and how they do things inspires me. Being an active agent in the change process has always been very satisfying: whether helping learners to express themselves in even more complex language, or, more recently, helping teachers to teach in ever more rewarding, efficient, and creative ways.

It is seeing the patterns and connections embedded in the complexity in a situation; understanding how it works in a systematic way; working out which buttons to push to enable change to happen; then actually operationalising them so that large-scale changes do happen within education systems. How can that not be exciting and inspiring?!

4: What challenges do you encounter in your work, and how do you deal with them?

That last one is important. These days, people seem to be particularly tenacious. Quitting is seen as losing. It isn’t. It is living to do something otherly creative another day. Most importantly, find a close friend to rant at. Tell them all about everything that is going wrong. Get it off your chest, then stop. Park it. Change your mindset to ‘deal’ and think about how you are going to change the situation. 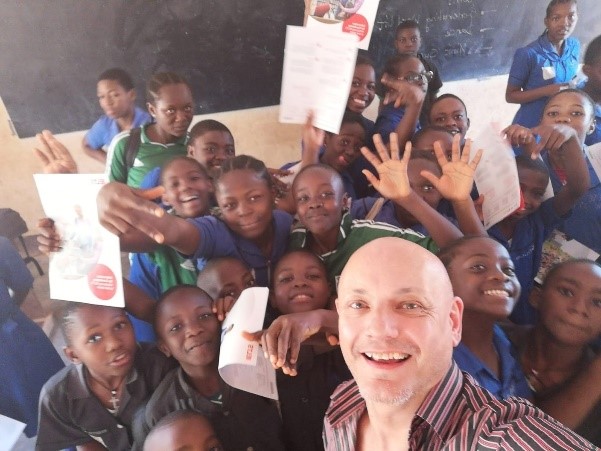 5: What accomplishment are you most proud of?

Spending the bulk of my mum’s last year on earth with her rather than working all the time. Having the foresight to take the time to do something more important with my life in 2018 while she needed me. Us workaholics tend to forget that it’s not all about work. Life is often more important.

6: What advice would you give to someone who wants to do the kind of work that you do?

Projects succeed because they have planned outcomes and change mechanisms taking the context into careful consideration. The inherent complexities and risks are mitigated against and progress is carefully monitored, with adjustments made at appropriate points within a flexible project design.

But that is not how good lives are led.

In your own development, don’t fix a direction at the expense of stopping to see where your options lie. Take the paths less travelled. Always say yes to opportunities. If you bang your head against a brick wall until your head is bleeding, get out. Nothing ever changed through willpower alone, so stop sweating it.

Everything happens for a reason. Your job is to find those reasons and see what kind of change they inspire.

7: What is next for you? What are you hoping or planning to do in the future?

Now that TransformELT is moving into its third year, we have already established ourselves as an innovator in the field and have gained trust and praise from across the industry. I would like to build on that initial success and consolidate it. We don’t want to become too big: world domination is certainly not our aim. I want to keep being involved in interesting, quality projects around the world and ensuring every day continues to be different. Visiting one or two new countries every year would be nice. Although this year it’s been up to seven already!

8: Is there anything else you want to say to Voices readers?

Step back from your current situation for a few minutes. Take a look around. Are you really doing what you want to be doing? Or is there an opportunity out there that might be more interesting?

“Step back from your current situation for a few minutes. Take a look around. Are you really doing what you want to be doing?”