Past Projects show where we’ve worked since TransformELT was formed, and paint a picture of the variety of areas we work in. If you’d like us for your project, please contact us to start the conversation.

TransformELT’s Alan Mackenzie was engaged to measure the impact of the “English for Success” project in Kazakhstan. Over a two-week period visiting schools in and around the Atyrau area, he identified areas of success and learning in the project, in addition to reviewing an evaluation framework and related set of evaluation tools which were used to assess the impact of the project in the classroom in the medium and long term.

The education system of Kazakhstan is undergoing transformative change to support Kazakhstan 2050 – a state vision to put Kazakhstan in the list of the 30 most developed nations in the world by the year 2050. English language is at the heart of those plans, including delivering Biology, Chemistry, Physics and Information Technology lessons in English in the last three years of secondary school and introducing compulsory English language lessons from the first year of primary school. 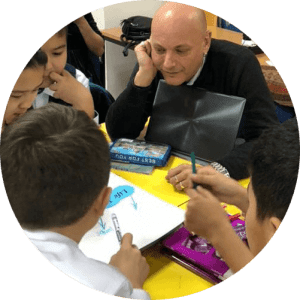 The need for English is becoming ever more vital for international engagement and as a core skill in the workforce, especially in Atyrau with its strong oil and gas industries. Since 2012 Tengizchevroil (TCO) and British Council implemented projects for English teachers at school level in Kulsary, Zhylyoi and Atyrau to improve the standards of teaching of English language in secondary schools.

English for Success aimed to increase capacity for the future, and also to scope institutional development needs of English at university and school levels in the Atyrau region. The aim was to use the information gathered to build a programme from 2018 onwards to enable TCO to gain much higher visibility in the region and nationally, position them as the exemplar employer and build long-lasting impact with communities.

The British Council identified Atyrau State University (ASU) as a key partner in support of this project. The reason for this partnership is that pedagogical departments at universities are being asked by MoES to lead on the new initiatives. By choosing to partner with ASU, the leading pedagogical university in the region, British Council aimed to enhance the sustainability of project actions.

In tandem with this, British Council proposed a long-term initiative that will benefit educators and students across the region whilst positioning TCO as a dynamic partner in the Atyrau region. British Council received a grant from TCO for GBP135,836 to implement this programme with the additional aim of increasing TCO’s visibility and standing in the region.